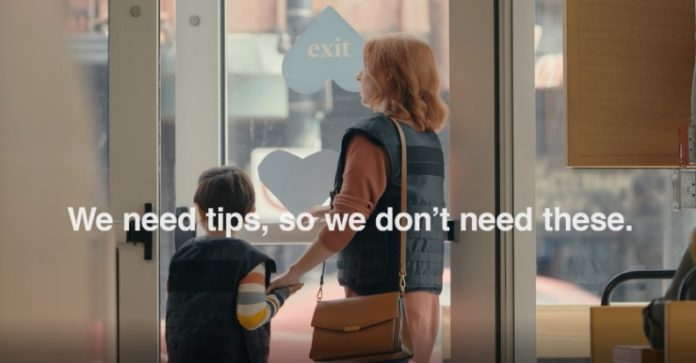 VANCOUVER, B.C.: With the number of brazen gang-related shootings seen locally in the past year, where innocent people could be accidently injured or even killed, Metro Vancouver Crime Stoppers is reviving its “guns and gangs” advertising campaign.

A “world where we all need to wear bullet-proof protection as part of our everyday wardrobe” is at the centre of the advertisements which will start appearing soon.

They’re designed to make us all look twice, think about the impact of gang shootings on our community and suggest where we might be headed if something isn’t done.

The ads contain a store window where “Kevlar” vests are on sale as a necessary fashion accessory, Kevlar umbrellas, and a TV spot about a coffee shop where customers need to be fitted for a vest before sitting on the outdoor patio.
“Of course, things aren’t really that bad, but we’re trying to prove a point,” says Linda Annis, Executive Director of Metro Vancouver Crime Stoppers.

“As we’ve seen, no neighbourhood is immune from gang violence and the ads featuring bullet-proof vests say it all, ‘we need tips, so we don’t need these’. Crime Stoppers is not the police. Any information you give to Crime Stoppers is kept totally anonymous and forwarded directly to the authorities for investigation.”

Creative services for this campaign were supplied by PS DDB.

The renewed appeal for anonymous tips is aimed at anyone with information that could help police make arrests in this most recent flareup of gang violence.

Crime Stoppers’ previous “Guns and Gangs” #World Without Crime ad campaign a few years ago is credited for 145 people being arrested for gang and/or illegal weapons offences. 219 guns were seized based on anonymous tips provided. By the end of that campaign, gang and gun crime tips to Crime Stoppers grew to account for 13 per cent of all tips Crime Stoppers received, up from six percent at the start.

A Crime Stoppers diagram shown at the campaign launch shows there have been almost 60 gang-related acts of gun violence recorded in a broad range of locations from Vancouver to Chilliwack over the past two years.

Metro Vancouver Crime Stoppers is a non-profit society and registered charity that offers rewards for anonymous tip information about criminal activity and provides it to investigators in the communities of Metro Vancouver, British Columbia, Canada.

Anonymous tips may be provided though Crime Stoppers’ downloadable “P3” app for Apple and Android phones, calling Crime Stoppers at 1-800-222-8477, 1-855-448-8477 (new number), online at solvecrime.ca or by following the link on the Metro Vancouver Crime Stoppers Facebook page. Find MVCS on Twitter: @solvecrime.

Metro Vancouver Crime Stoppers accepts tips in 115 different languages and will pay a reward of up to $5,000 for information leading to the arrest of a criminal, recovery of stolen property, seizure of illegal drugs or guns or denial of a fraudulent insurance claim. Tipsters stay anonymous by using code numbers to check back later and collect their rewards.