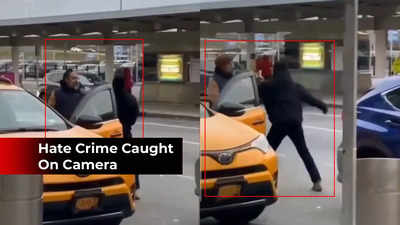 In yet another case of suspected hate crime, an Indian-origin Sikh taxi driver in the US has been assaulted by an unidentified man, who knocked off his turban and also used expletives against him outside the JFK International Airport, according to a video on social media.

The undated 26-second video was uploaded by Navjot Pal Kaur on micro-blogging site Twitter on January 4, showing a man assaulting the Sikh taxi driver outside the airport. She said the video was shot by a bystander at the airport.

The person can be heard allegedly using expletives against the victim. He repeatedly hits and punches him and knocks off his turban.

The driver had parked his cab at the Terminal 4 taxi stand when another driver blocked his vehicle. When he picked up a customer, he stepped out of his car to ask the other driver to move. The other driver attempted to hit the driver with his own car door; he then began repeatedly punching the cab driver in the head, chest, and arms, knocking off his turban, it said in a statement.

“I was shocked and angered to be assaulted for doing nothing but minding my own business. While working, no one should experience such hate. I am hopeful that the police can identify, arrest, and charge the person who attacked me so that I can move forward,” the Sikh taxi driver, identified only as Mr Singh out of respect for his request for privacy, has told The Sikh Coalition.

“I just wanted to highlight the fact that hatred continues to remain in our society and unfortunately I’ve seen Sikh cab drivers get assaulted again and again,” Kaur tweeted.

“For those who aren’t Sikh, I can’t put into words what it means to have your turban knocked off — or to see someone else’s turban knocked off. It’s visceral and gut-wrenching and just so disheartening to witness,” Simran Jeet Singh, author and Director for the Aspen Institute’s Inclusive America Project, tweeted.