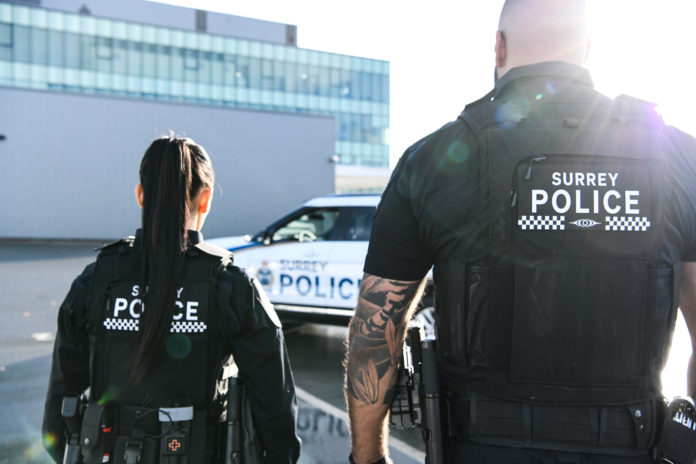 While the public can expect to see officers in both the RCMP and SPS uniforms responding to calls for service, all contact information and police station locations remain the same. The public will continue to report crime and suspicious activity to the Surrey RCMP non-emergency number at 604-599-0502 (911 for emergencies) or report online.

SURREY: People of Surrey, BC, will now notice police officers in two different uniforms patrolling the streets of their city. The city has started a phased, integrated transition process of federal police force to its own municipal police with the first group of 29 Surrey Police Service (SPS) officers assuming operational policing duties and other 21 to hit the streets on coming weeks, following an orientation with Surrey RCMP that began on November 29th. While the process is long and tedious, heads of both Surrey RCMP and SPS have ensured that public safety would be the top priority.

Assistant Commissioner Brian Edwards, Officer in Charge of the Surrey RCMP and Chief Constable Norm Lipinski with the SPS in a joint press conference said that SPS officers will primarily be supporting Frontline operations within the RCMP Municipal Policing Unit (Surrey RCMP) with a small number assigned to the General Investigation Unit, providing 24/7 support on Major Crime investigations.

While the public can expect to see officers in both the RCMP and SPS uniforms responding to calls for service, all contact information and police station locations remain the same. The public will continue to report crime and suspicious activity to the Surrey RCMP non-emergency number at 604-599-0502 (911 for emergencies) or report online.

As part of the onboarding process, SPS will receive a detailed orientation outlining Surrey detachment’s policies and practices. Each SPS officer will be paired up with an experienced Surrey RCMP officer for a few shifts to help familiarize them with policing in Surrey. After the orientation and pairing, SPS officers will be out responding to files, for the time being, in RCMP branded vehicles.

During this initial phase of the policing transition, the Surrey RCMP will continue to be in command as the police force of jurisdiction, overseeing all operational policing matters and the delivery of policing programs and services. “Our top priority throughout this transition is and will remain public safety,” said Assistant Commissioner Brian Edwards, Officer in Charge of the Surrey RCMP.

“A policing transition of this magnitude is unprecedented in Canada. It has required – and continues to require – collaboration and extensive planning between SPS and the RCMP, and between the three levels of government.” said Chief Constable Norm Lipinski with the Surrey Police Service. “It also requires careful consideration of the hundreds of employees who are impacted by this transition, as well as all Surrey residents and business owners.”

The RCMP and SPS are building a collaborative human resources strategy to ensure the coordination and deployment of SPS officers alongside Surrey RCMP officers. Once this plan has been agreed upon, more SPS officers will begin to deploy into Surrey and Surrey RCMP members will gradually begin transferring to other RCMP detachments or units.

The Surrey Policing Transition Trilateral Committee (SPTTC) is tasked with guiding and supporting the development, negotiation and implementation of a phased transition of policing services in Surrey. The SPTTC is made up of senior representatives from the three levels of government: federal, provincial, municipal.

Find more information in regards to the policing transition on the Surrey RCMP and Surrey Police Service websites: www.surreyrcmp.ca and www.surreypolice.ca.