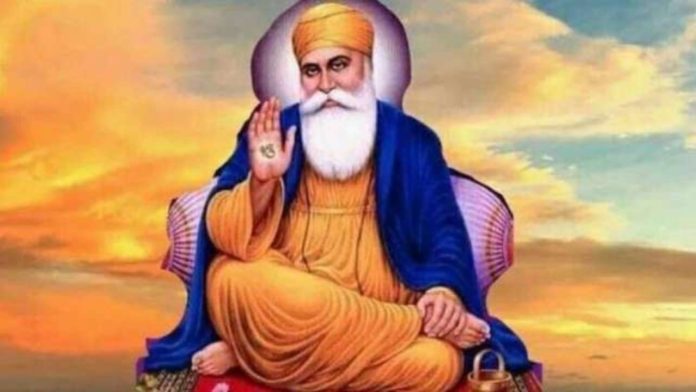 On November 19, Guru Nanak Jayanti, or Gurupurab was celebrated worldwide. Mysterious are the ways of God and mysterious is His Creation. To stand alone in His Creation and carve out a different path is not a cake walk. It requires lot of gut and grit to be alone because the human being finds himself comfortable in a herd.
The herd, in human history, has created less harmony and more havoc. That is why all are afraid of the herd.  It hardly matters whether it is a herd of locusts, of sheep or of fanatic human beings.
Five hundred and fifty-two years ago, an enlightened soul, different and alone from all around him proclaimed, “Nanak Dukhiya Sab Sansar” and spread a message of love and brotherhood based on the remembrance of Naam, Ek Omkar, Akalpurukh, Waheguru or Gurprasad, which is an abstract narrative beyond time, space and shape.

He said, “Nanak Dukhia Sab Sansar, So Sukhiya Jin Naam Aadhaar.”
He realized that Surrender to Naam, an Abstract Power is the only way to get rid of suffering. According to him, surrender begins with the acknowledgement that some supreme or higher power is managing this whole universe including our daily life. One may call that power God, Ek Omkar, Waheguru or Akalpurukh. When you surrender to this supreme power, which is pulling the strings of this puppet show, you transcend the self-centred and ego-driven mind.
In common parlance, surrender is often confused with resignation and defeat.  But Nanak’s surrender is entirely another aspect.  It is the acceptance of the reality itself.  To our ego, it may sound passive, but genuine surrender feels like a burden being lifted from our mind. After a total surrender, we realize that we are merely the dancers and not the choreographer; we are just the drum and not the drummer. An instrument alone! When an instrument is ready, the player rushes to play it.
Some higher power is playing through us.  Instead of disempowering, surrender uplift our courage by being less attached to the outcome, knowing that the ultimate result is not in our control.  We learn to let go, totally committed (aakhand) yet unattached.
Nanak’s kirat kar, wand chhak and naam jap is also a surrender to your household duties. When you form a healthy relationship with your duty and surrender to it, you lead to make a way for Gurprasad and a balance in your life. By this way, the pull and push of life are eliminated and one is away from the dreams of struggle and suffering.

As an example, you met somebody a long time back. You forgot his name.  Now you are trying hard to recollect it.  You are raking your head to remember it.  It seems that it is on your tongue, but cannot utter it. You spend hours in this tug of war.  Finally, you surrender to your attempt and exertion. You are in a relaxed mood.  After a while, even when you are not trying to remember that particular name, it comes to your mind all of a sudden.
Similarly, methods can be found to solve a problem in your life if you surrender to a more relaxed way instead of acting in an anxious and aggressive way.  It is called ‘Gurprasad’.  In Urdu language Gur means Method – a formula to solve the problem.  We need to slow down in order to awaken to our spiritual nature.

Guru Nanak gave different names to meditation and impermanence. He called these as Simran and Maya. The constant Simran of these abstract narratives leads us to sacredness. Simran reveals the universal aspect of personal experience and the different tier of human emotions. Guru Nanak’s Bani emphasizes the illusion and impermanence of Maya, the material possessions.  When we understand the true nature of Maya, we shun its undue collection by dishonest means.

Anthropology tells us that human beings cannot survive without a sense of the sacred. Without sacredness in one form or the other we lose connection to the divine source. Sacredness inspires awe at the grand mystery of the universe. “Alone let him constantly meditate in solitude on that which is salutary for his soul, for he who meditates in solitude attains supreme bliss.” – Guru Nanak