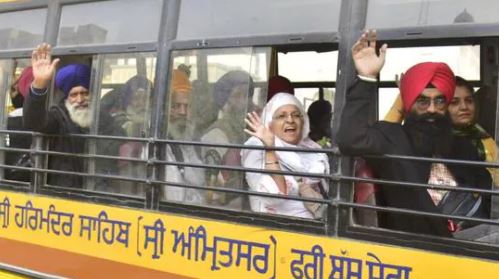 The pilgrims will visit historic gurdwaras in Pakistan, including Gurdwara Darbar Sahib in Kartarpur Sahib, before returning on November 26 A Sikh jatha (group of pilgrims) left from Golden Temple in Amritsar for Pakistan on Wednesday to celebrate the 552nd Prakash Purb (birth anniversary) of Sikhism founder Guru Nanak Dev at his birthplace at Nankana Sahib.

The jatha will cross over to the neighbouring country via the Attari-Wagah border checkpoint by the evening. Members of the Pakistan Sikh Gurdwara Parbandhak Committee (PSGPC) will welcome the jatha at Wagah border.

Police expects around 3,000 pilgrims to cross over to Pakistan on Wednesday.

“The pilgrims have started crossing the border. The exact number of pilgrims going to celebrate Gurpurb will be known by evening,” said the Punjab Police protocol officer at Attari border. All pilgrims underwent the mandatory Covid-19 test before departure.

Most of them are being sent by the Shiromani Gurdwara Parbandhak Committee (SGPC). The apex gurdwara body’s jatha is led by its members Rampal Singh Behniwal, Balwinder Singh Veinpui and Bibi Ravinder Kaur Ajrana.

The SGPC sent a list of 1,046 devotees to the Government of India for visas, but only 856 were approved. The SGPC jatha was flagged off by general secretary Bhagwant Singh Sialka. “The governments of both countries should have approved the visas of all devotees on such an occasion. Those whose visas were rejected are dejected,” Sialka said.

The Sikh jatha was honoured by SGPC executive member Harbhajan Singh Masana, additional secretary Sukhdev Singh Bhura Kohna and vice-secretary Kulwinder Singh Ramdas.The Sikh jatha will visit historic gurdwaras in Pakistan, including Gurdwara Darbar Sahib in Kartarpur Sahib, before returning on November 26. The visit of the jatha coincides with the reopening of the Kartarpur Sahib Corridor after 20 months. The corridor had been closed due to the coronavirus pandemic.

“We are grateful that we’ve got this chance to visit Nankana Sahib on Guru Nanak’a birth anniversary. We are thankful to the Government of India for granting us visas and reopening the Kartarpur Corridor,” said one of the pilgrims, Paramjit Kaur.