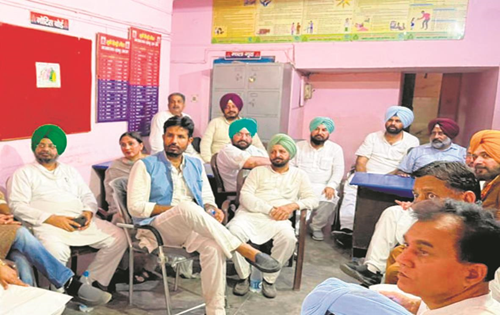 CHANDIGRH – After days of unease between CM Charanjit Singh Channi and PCC chief Navjot Singh Sidhu, party’s national call to take on the BJP-led government over the Lakhimpur Kheri incident brought the two leaders on a common stage at Mohali, the take-off point for the protest march to UP.

As CM arrived at the venue, his convoy halted short of Sidhu’s tractor-trailer owing to the crowd. Sidhu, who was addressing party men, suddenly asked them to begin the march, prompting Channi to scamper through the crowd to join him and flag off the march

Putting up a joint front, CM Channi took out time from a pre-wedding function of his elder son at Morinda to reach Mohali. After having returned from UP early this morning, Channi flew in the state helicopter from Morinda to the Mohali international airport, located a short distance from the rally venue.

Both leaders raised slogans in favour of farmers, holding flags associated with farmers’ agitation before Channi flagged of the march.

After a clear message to Sidhu from party leader Rahul Gandhi, who made it a point to take CM Channi along last night to meet the families of farmers who died during the UP violence, Sidhu seemed keen on bouncing back. After lying low following his opposition to the appointment of APS Deol as Advocate General and Iqbal Preet Singh Sahota as DGP, besides re-induction of some ministers in the Channi Cabinet, Sidhu took centre stage today following party’s call to take out the protest march.

The presence of CM Channi with Rahul and Priyanka Gandhi during their UP visit was a clear message to Sidhu to fall in line. “The issues raised by Sidhu hold ground. But the timing was wrong. The protest rally has given the much-needed push to bring the dissenting voices in Punjab Congress on one platform,” said a party insider.

A senior leader said efforts by AICC observer Harish Chaudhary to rein in Sidhu, without giving him much headway as far as decisions being taken by CM Channi were concerned, seem to have yielded result. Though Sidhu has so far not withdrawn his resignation, he has for the past three days increased his field activity.

Meanwhile, under flak over frequent use of state helicopter, Channi again raised many an eyebrow when he took the chopper to shuttle between his family function at Morinda and the march venue in Mohali.