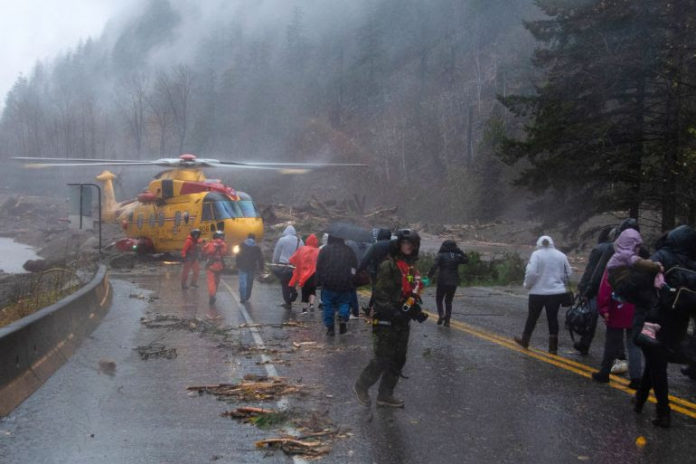 SURREY, BC: British Columbians woke up to the worst ever rains in the province this week that caused exponential damage to properties, people and especially farmers around the province. Thousands of people, farm animals and live stock were displaced and one woman was confirmed dead after a mudslide swept across a portion of B.C.’s Highway 99. All four highways that connect the Lower Mainland with the rest of the province were closed by landslides and flooding. The City of Hope,  Sumas Prairie area of Abbotsford, the City of Merritt were some of the worst hit areas. Those who were asked to evacuate were stuck on roads before they could get any help. According to the government’s last reported statistics there were approximately 17,775 people evacuated due to impacts from the flooding, with 5,918 properties on Evacuation Order, and 3,632 properties on Evacuation Alert. Possible disruptions in supply chains were obvious which resulted in panic buying and empty shelves. To deal with the disaster and rescue people, the B.C. government declared a provincial state of emergency.
We are stronger, together – Premier John Horgan
Premier pleas for patience…do not hoard or panic buy!
VICTORIA, BC: The B.C. government declared a provincial state of emergency to mitigate impacts on transportation networks and movement of essential goods and supplies, and to support the provincewide response and recovery from the widespread damage caused by severe flooding and landslides in British Columbia.
The state of emergency gives agencies, such as the Ministry of Transportation and Infrastructure, Emergency Management BC, the RCMP and others the ability to use extraordinary measures to protect people and communities.
“The order will preserve basic access to services and supplies for communities across the province,” said Premier Horgan during a news conference.
Mike Farnworth, Minister of Public Safety and Solicitor General, made the declaration on Nov. 17, 2021, based on the recommendation from the Ministry of Transportation and Infrastructure, and Emergency Management BC.
“Our focus is on clearing, repairing and reopening roads to connect the Interior and the North to the Lower Mainland and Vancouver Island, to get our supply chains moving,” said Rob Fleming, Minister of Transportation and Infrastructure. “We are working closely with multiple partners to make this happen. It is a big job, but collectively we are up to the challenge and will get things opened up again just as soon as we possibly can.”
The premier also urged residents not to hoard food as some grocery store shelves apparently were already running bare.
“Do the right thing,” he said. “Listen to what your mom told you when you were little. Do unto others as you would have do unto you. Respect the fact that you do not need 48 eggs, a dozen will do, and leave the rest for somebody else.”
“Be patient and keep normal shopping habits, even during stressful times. Hoarding goods can cause supply issues where they don’t exist. We’re working with local communities and emergency crews to make sure essential goods and supplies reach communities cut-off by the floods. Thank you to everyone doing their part during this emergency,” is the message from the government.
The state of emergency is initially in effect for 14 days and may be extended or rescinded as necessary. The state of emergency applies to the whole province and ensures federal, provincial and local resources can be delivered in a co-ordinated response to protect the public, which remains the provincial government’s top priority.
The federal government has responded to and accepted British Columbia’s requests for assistance.
For people wanting to help those affected by the flood, please send them to this link or phone number: https://www.gofundme.com/en-ca/c/act/bc-flooding
Samaritan’s Purse is helping flood victims in British Columbia
– https://www.samaritanspurse.ca/single-donation/bc-flood-response/
Red Cross toll-free line is: 1-800-418-1111.
Meanwhile Jinny Sims, MLA Surrey-Panorama, informed, “In light of the challenges you are facing, I wanted to reach out to advise that individuals with insurance questions and concerns stemming from the flood/rain can call my organization – the Insurance Bureau of Canada. We’re the national association of Canada’s home and business insurers. Roughly 50% of British Columbians have flood insurance on their home.”

IBC can be reached at 1-844-2ASK-IBC if you have any insurance questions/concerns.