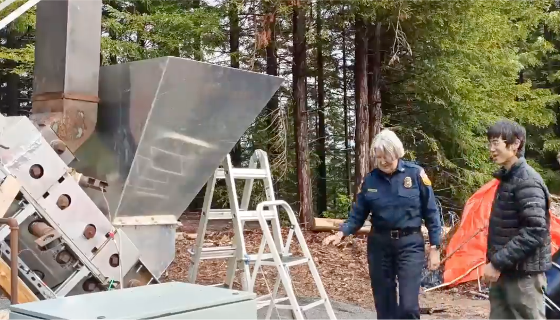 Many farmers burn their crop residue, which has devastating effects on climate and human health through smoke pollution or by providing fuel to feed catastrophic wildfires.Using MiniTorr to transform the waste at the local level into fertilizer means farmers can improve their crop yields and invest the money into their daily operations—all while cutting down on carbon emission, improving air quality and reducing wildfire risk.

The waste-burning emission reduction invention of a UBC post-doctoral chemical and biological engineering student now has royal recognition and the attention of one of Earth’s most influential billionaires.

Kevin Kung, co-founder, president and chief technical officer of start-up company Takachar, and his partner Vidyut Mohan (co-founder and CEO), were recently presented with an Earthshot Prize in the Clean Air Category, worth $1 million British pounds, as well as another US$250,000—the equivalent of C$1.9 million in total— in the Carbon Dioxide Removal Demonstration student category from the XPrize and Musk Foundation, founded by Elon Musk.

The Earthshot Prize is awarded by the Royal Foundation of The Duke and Duchess of Cambridge—otherwise known as Prince William and Kate Middleton.

“I’m really surprised and very humbled and honoured to receive these prizes, and I’m grateful for the significant attention they bring to the problem of residue burning,” said Kung.

The recent prizes were bestowed upon what Kung and Mohan have dubbed the “MiniTorr.”

The MiniTorr is a cheap and small-scale portable machine that uses torrefaction to more easily transform biomass (crop residue, for example) into sellable bio-products, such as fuel and fertilizer.

Where crop and forest residues are often wet, bulky and expensive to gather and transport to central conversion facilities, the MiniTorr can fit in a pick-up truck and travel directly to the waste.

As Kung explains, many farmers burn their crop residue, which has devastating effects on climate and human health through smoke pollution or by providing fuel to feed catastrophic wildfires.

Using MiniTorr to transform the waste at the local level into fertilizer means farmers can improve their crop yields and invest the money into their daily operations—all while cutting down on carbon emission, improving air quality and reducing wildfire risk.

“We want this technology to be a one-stop shop for communities to build bio economies, reduce waste and grow in a self-sustaining way that doesn’t depend on the centralized model of biomass conversion,” says Kung.

Three MiniTorrs are currently in operation in India and two are being tested in California.

The goal, says Kung, is to use the prize money to scale up the technology and test its application in other areas such as the conversion of logging waste, wildfire management and B.C. agriculture.

Kung, 35, was born in Taiwan and grew up in Vancouver where he graduated from Sir Winston Churchill Secondary. He then went on to pursue post-secondary studies at Princeton, the University of Cambridge and finally at Massachusetts Institute of Technology, where he achieved a Doctor of Philosophy in Biofuels and Renewable Energy in 2017. He expects to complete his post-doctoral studies at UBC next June.

He looks back to his early childhood in Taiwan as a key motivation for working towards reducing greenhouse gas emissions and pollutants.

“When I was small, I grew up next to rice paddy fields and I remember when the farmers would burn off the stubble left behind after harvesting, which led to local air quality issues,” he says.

“There will always be a nostalgic element to the smoke and smell in the air but looking back, those memories have very different connotations now.”

He adds: “I would not want my children to have that kind of memory.”

For more information about [email protected], go to www.entrepreneurship.ubc.ca.

A Record Year for the BC Housing Market